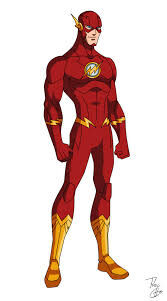 Barry Allen is the fastest man alive. He has many dangerous foes, but one stands out from the rest, Professor Zoom, one of the Reverse Flashes. Professor Zoom is also a speedster like The Flash. Barry has a best friend Iris whom he falls in love with. Barry works for the Central City Police Department as a forensic police scientist. The Flash had recently been able to travel through time given the fact that there were less speedsters in the group, allowing more speed in the speed force to be tapped into and used. Barry eventually marries Iris and has a son named Don Allen and a grandson named Bart Allen. In the comics, Barry's wife, Iris, was murdered by Professor Zoom since she refused to marry Zoom. Barry has had a struggling past but is still strong enough to fight Central City's most wanted villains, especially his polar opposite Professor Zoom. Apparently to Barry's surprise, he had a long lost twin named Malcom Thawne, who descended from Eobard Thawne. The Allen/Thawne feud ended when Meloni Thawne married Don Allen and they had a son, Bart Allen, Barry's grandson, who eventually became Impulse and the future mantle of The Flash.

Retrieved from "https://the-flash-wikia.fandom.com/wiki/The_Flash(Barry_Allen)?oldid=4244"
Community content is available under CC-BY-SA unless otherwise noted.